The third eco-tour operated by Co’ox Mayab as part as the Festival de Aves (Birds Festival) Toh 2018 took place at the port of San Felipe. The main activities were the boat ride through the ría to watch birds, the walking tour to the “ojo de agua” Kanbulnah, the visit to Isla Cerritos and the free time on the beach.

The birding adventure began very early at the meeting point, we left the city at 4:20 a.m. with 12 very enthusiastic participants. After almost a 3-hour journey we finally reached our destination, where a few Laughing Gulls (Leucophaeus atricilla) welcomed us. We had a snack break to regain energy and boarded the boats, because birds don’t wait!.

on the boat across the river

After boarding the boats, we split up in two groups, this played a bit against us because we weren´t able to see the same bird species. For example, the group that departed first could sight some important species like the bare-throated tiger heron (Tigrisoma mexicanum) and up to four specimens of boat-billed heron (Cochlearius cochlearius). On the other side, the second group also sighted species that the others didn’t, like the yellow-crowned night
heron (Nyctanassa violacea), the least bittern (Ixobrychus exilis) and had bad luck because they scared a fish hawk (Pandion haliaetus) that was perched on the mangrove shore. However, being able to see it in flight was a very pleasant experience for the participants.

Among the species that everyone saw during the ride through the ria are the yellow warbler (Setophaga petechia eriathachorides), the American white ibis (Eudocimus albus), the red-winged blackbird (Agelaius phoeniceus), the green heron (Butorides virescens) and we were able to see a group of American flamingos (Phoenicopterus ruber) and roseate spoonbills (Platalea ajaja) in flight.

By the “Sendero” and  the visit to Isla Cerritos

During the walking tour on the trail Kanbulnah, the participants saw and photographed a female green kingfisher (Chloroceryle americana) and inside the “ojo de agua” a female Morelet´s crocodile (Crocodylus moreletii) in its nesting season. In this area all participants got to know each other, and a group picture was taken before setting off to Isla Cerritos.

The ride to Isla Cerritos was a pleasant experience and despite of not seeing a wide diversity of species, we could observe large numbers of double-crested cormorants (Phalacrocorax auritus), brown pelicans (Pelecanus occidentalis), magnificent frigatebirds (Fregata magnificens) and some lesser yellow-headed vultures (Cathartes burrovianus), turkey vultures (Cathartes aura) and wood storks (Mycteria americana). After the tour around the island, an hour was given to the participants to rest at the beach. During this time, some decided to refresh in the warm waters of the Mexican gulf and others rested under the palapas. When the free time was over we boarded the boats again to return to the port, the ride was over.

Lunch took place at the restaurant Vaselina, where everyone could taste traditional dishes of the coast in a typical birdwatchers’ camaraderie. When the lunch time was over, a short time was given to stroll through the port before returning to the city.

Although we didn´t see a large list of birds, this tour allowed us to observe some species and learn a little about coastal ecosystems and their environmental value. The participants became a united group, where the most experienced were willing to share their knowledge with the ones that were taking the first steps into the world of birds. 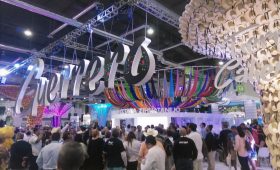